Prinášame Svetlo a radosť prostredníctvom umenia. U nás nájdete vždy originálny a jedinečný tovar. Máme široký záber produktov. Ďakujeme za návštevu:-)
We bring Light and joy through art. You will always find original and unique goods with us. We have a wide range of products. Thank you for visiting :-)
12345
Wholesale prices

We offer you to buy paintings by Mária Matúšková at great prices. show more...

Dear customers and friends of valuable art and books. From today, you can pay by credit card for your convenience. We look forward to your orders. We thank you.

We produce luxury coats of arms made of glass. We can also produce glass logos for companies and trading companies. Feel free to contact us. show more...

We are creating a new e-shop for you focused on the sale of art products, paintings and art accessories.

show all news...
From Love to Art
Umenie s Láskou

However, Petronella Vlhová would not change this beautiful material, as she calls it, for nothing. "In my opinion, glass can absolutely express what the artist feels inside. It can gently, sensitively and at the same time fully express the idea given to him. It cannot be treated lightly. Glass reflects the approach of the artist to it." says a graduated designer and glass painter. He has been processing glass since he was fifteen years old. "First comes an idea or topic that I express through glass. I'm not in the habit of putting negative feelings and thoughts into the work. It's probably because I get rid of all similar phenomena in the production and work with glass," he says with a smile. 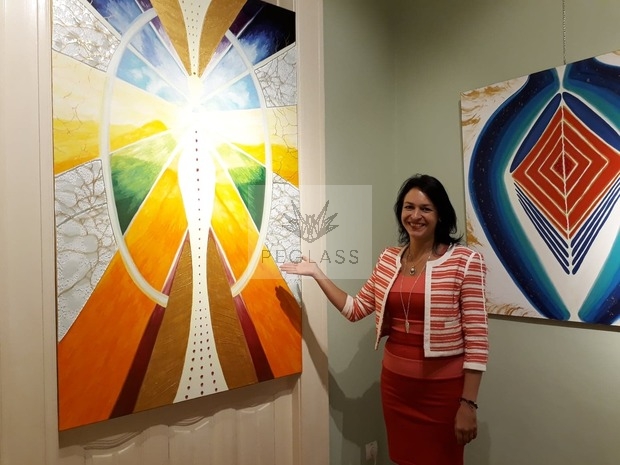 Petronella Vlhová creates on the border between free art and design. "Of course, I can also make useful things, it depends on the client and the given space. However, a symbolic abstraction is typical for my work. I devote myself to philosophical expression, the theme of the beginning, the beginning of a new life, and the affinity of souls, "he describes his work to us.

Just as an artist needs a pencil, so a glassmaker needs a furnace for his work. Petronella Vlhová decided to invest in a new fusing furnace designed for hatching or shaping glass. Since such a furnace costs a lot of money, a private company decided to support its talent and contribute financially to its purchase. The first to baptize the furnace with their work were therefore the guests and supporters of its art, who visited the kingdom of Petronella Vlhová during the solemn baptism of September. The workshop in Višňov came to life with "ad hoc artists". According to their imagination, they painted glass plates devoured by a hot kiln, so that after a few days, like a machine for miracles, it would come out finished pieces worthy of framing. We also felt it, we had a festive drink with a specially prepared wine from Pete Mikuška and there was a traditional Slovak 40-year-old plum brandy from Miroslav Králik."I am very grateful for the people I met in Žilina, who help and support me. Just like that, from a good heart. Thanks to all friends and acquaintances who in any way participated in the realization of the dream, which became a reality. Especially to my colleague Tibor. To Kočut, who brought me to this place and has the credit for what my new home looks like, " said Petronella, who is originally from Púchov and has only recently settled in a picturesque village near Žilina. Since then, they claim that if there is paradise somewhere on Earth, it is in Višňov.

In a new home with a new furnace, it starts as if from again under its artistic brand PETRA (the article is of an older date - it is currently working under the trademark PEGLASS ART sro ) 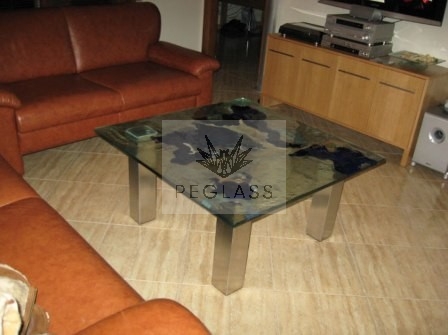 "Realization of works is time and technically demanding. Glass achieves the desired shape when heated to a certain temperature, but it is already the icing on the cake. It is a long process." . The raw glass, which is placed in the furnace, can be heated and fired to a certain temperature by setting a firing curve. It depends on its thickness. It is important to increase the temperature, the time interval at individual temperatures and then the decrease in temperature, ie the cooling of the product. It requires a lot of practice and life experience. Not everyone can do it unless they control the laws and parameters that this process requires, " describes Petronella Vlhová.

Glass is a luxury material. "It is so specific that it also requires a serious clientele that can perceive, understand and accept the artistic statement given in the glass. In order to be able to perceive the depth of the work. Although it is quite exceptional in art globally. We may have a thousand paintings painted, but if there is no soul in the work, it will not appeal. It is probably mutual, "he thinks.

Glass cannot be mass-produced unless it is a cupboard cup. It is a kind of saffron in a colorful garden of art. We are therefore glad that we found this discovery in a small glass workshop in Višňov, in a house with the distinctive name Villa Petra.

Currently, there is no comment available
add comment
Only registered and logged-on users can post the comments.
Anketa
This site uses cookies to help us provide services. By using our services, you consent to the use of cookies. More information can be found here.
✖